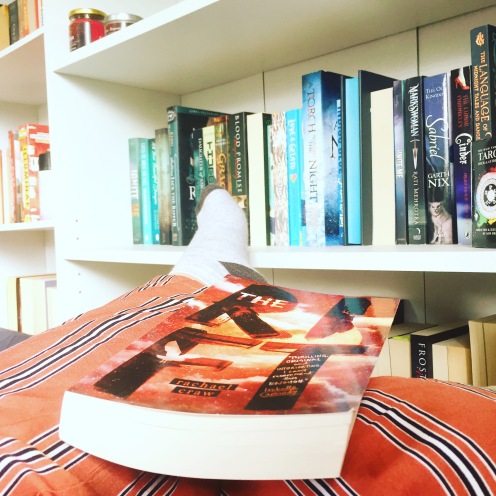 WHAT I LIKED
-Cal, Meg, Bren, Rilke, Joss, Reeva, Fallon
-the ‘familiars’
-the deer
WHAT I WAS MEH ABOUT
-the pacing
-Cora & Seargent
-the ending

The rift is a multi-perspective story about Cal and Meg, two people who have been bitten by rift hounds (essentially space dogs) and have their lives messed up. This novel details how the bites affect their lives, and how the events of that night, many years ago, are still playing out.
The cast of characters was unique and had contrasting thoughts, emotions and wants. You had the emotionally driven Meg, the distant Cal, heartbroken Cora, strong-willed Rilke and the villain you never expected. Rachel Craw weaves realistic characters that all had major flaws and felt like they deserved to exist in the real world.
Plot-wise, this was a pretty out of it fantasy. It was set in the real world but as if there was a secret island with magnetic ley lines, old deer and space dogs that hunted the deer. There were a group of people, called the rangers who were taught how to protect the deer from the one night a year where the rift opens wide. There were a lot of vicious scenes of the hounds ripping people up, and it wasn’t glossed over so if you’re a little uncomfortable with such things, I’d definitely warn you off of this book.
On a cooler note, most rangers had familiars of sorts. They were animals, most noticeably birds, who could share images with the person they bonded with. It was really cool to see Reeva, Cal’s bird bond with Meg and the dynamic of those who once had a familiar but then lost them.
The whole story was really good, but I would’ve loved to know who became the next leader, and how things were going to keep going. Even just in an epilogue set a year later or something!
The only fault I really have with this book is that the pacing felt off. Sometimes, I wanted to skim read to get to the better parts, and then other times I’d turn the page only to see a massive time jump that left me wondering what happened in between. I feel like if some more harsh editing was done, perhaps the excessively flowery bits that slowed the story down, would have been cut out and the story would have overall felt better paced

One thought on “A RIVETING YA – THE RIFT REVIEW”